On this Christmas Day, I got to thinking about the Star of Bethlehem and wondered why a flower would have such a name. The following is what I discovered.

Very simply, the plant’s star-shaped flowers inspired its name, that after the Star of Bethlehem that appeared in the biblical account of the birth of Jesus. Because of this biblical association, this plant embraces a meaning of purity, hope and happiness.

And now, about that plant. Star-of-Bethlehem is not native to this continent; rather, it is from southern Europe and southern Africa. It is a perennial forb with a rosette of basal leaves spanning about twelve inches across, each about 6-12″ long and up to ¼” wide. The leaves curve upward from the base and bend downward around the middle. Leaves have smooth margins, parallel venation and each often has a white stripe in the middle.

Star-of-Bethlehem – Note the grass-like leaves with a white stripe along the middle of each.

Each plant has one or more flower stalks arising from the center of the basal rosette with each stalk terminating with a raceme of white six-petaled blooms. Flowers open in the morning and usually close up by noon.

Finally, back to the Star of Bethlehem. Read an explanation from an astronomer’s perspective; and another.

With all that being said, I want to wish you all a very blessed and Merry Christmas!

O Tannenbaum is enjoyed by many at this time of year.  Interestingly, though, the song is actually singing the praises of a fir tree:  in particular, its evergreen quality as a symbol of constancy and faithfulness.  Read the lyrics.

One of our native fir trees is Eastern Hemlock. 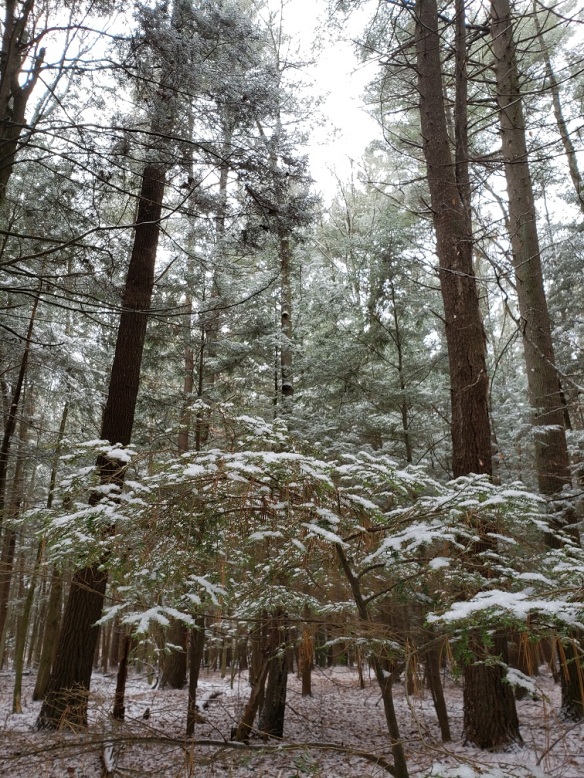 Take a listen to Nat King Cole’s immortal voice and enjoy this holiday classic in its native tongue – German.

Another “evergreen” exhibiting “constancy” isn’t a fir, or even a tree.  It’s a small plant that has appeared across our landscape since prehistoric times.  Known as a clubmoss, this particular species is called Princess Pine (Lycopodium obscurum) (also called Prince’s Pine or Ground Pine).  This specimen caught my eye; I dubbed it “O Tannenbaum!”

Merry Christmas to all!

Two feet of snow about two weeks ago.  Lots of very mild, damp and even foggy weather since then.  Nevertheless, it’s that time of year again!

The winter solstice will occur on December 21.

Winter is a great time for birdwatching from the comfort of your own home.  Consider putting up a few bird feeders.  For more info about winter bird feeding, please view my prior post.  Winter is also an excellent time to learn about animal tracks.  View this guide to winter tracks.

The arrival of this new season will mark the return of the shortest days of the entire year.  How do you want to enjoy the outdoors with those few hours of daylight?

Here is a list of winter outdoor activities to consider: