I invite you to peruse the photos below of trees, shrubs, vines and forbs and offer your answers to this winter plant identification quiz. All photos were taken today at Veterans Memorial Park in the Town of Clifton Park. Click on any photo for a closer look.

Check back next week for the answers!

As delicate as a snowflake

What are your favorite winter solstice plants? Read more.

Backlit by the morning sun, the views did not disappoint.

The winter solstice will occur on December 21. The season offers opportunities aplenty to view our winter landscape from a number of perspectives –

Time of day (and with shorter days, the opportunities pass quickly!):

As a medium for imprints:

The arrival of this new season will mark the return of the shortest days of the entire year.  How do you want to enjoy the outdoors with those few hours of daylight?

Here is a list of winter outdoor and online activities to consider:

There is good news to share—cases of the mystery bird disease are no longer being reported. All 11 states that had issued do-not-feed recommendations have now lifted their restrictions, or they were allowed to expire.

As of yet, a cause of this bird disease has not been determined. Several scientists have pointed out that the ailment has been concentrated in areas where “Brood X” periodical cicadas had a big emergence this spring.  Accordingly, one theory is that this disease may be tied to that event. While plausible, there has so far been no confirmation. And some birds apparently suffering from this condition have been found in areas where no Brood X cicadas emerged.

Anyway, you may safely start feeding birds in your yard once again. Keep those binoculars handy and enjoy the show!

The fall months are the best opportunity to view Fomalhaut – one of the brightest stars in the sky at this time of year.

Crips autumn air and a backdrop of fall colors is a great time to get outdoors.  Observe nature at a local preserve.  Go birdwatching.  Take a tour of any of the area bike trails.

When will fall colors begin and when will they peak? View The Fall Foliage Prediction Map.

Forage for some wild edibles.  Autumn marks the annual ripening of the fruits and seeds of many plants.  For me, foraging each fall for ripened hickory nuts is an annual tradition.  If you’d like to learn more about foraging for these tasty wild nuts, please view the Foraging for Wild Edibles webpage of this blog. 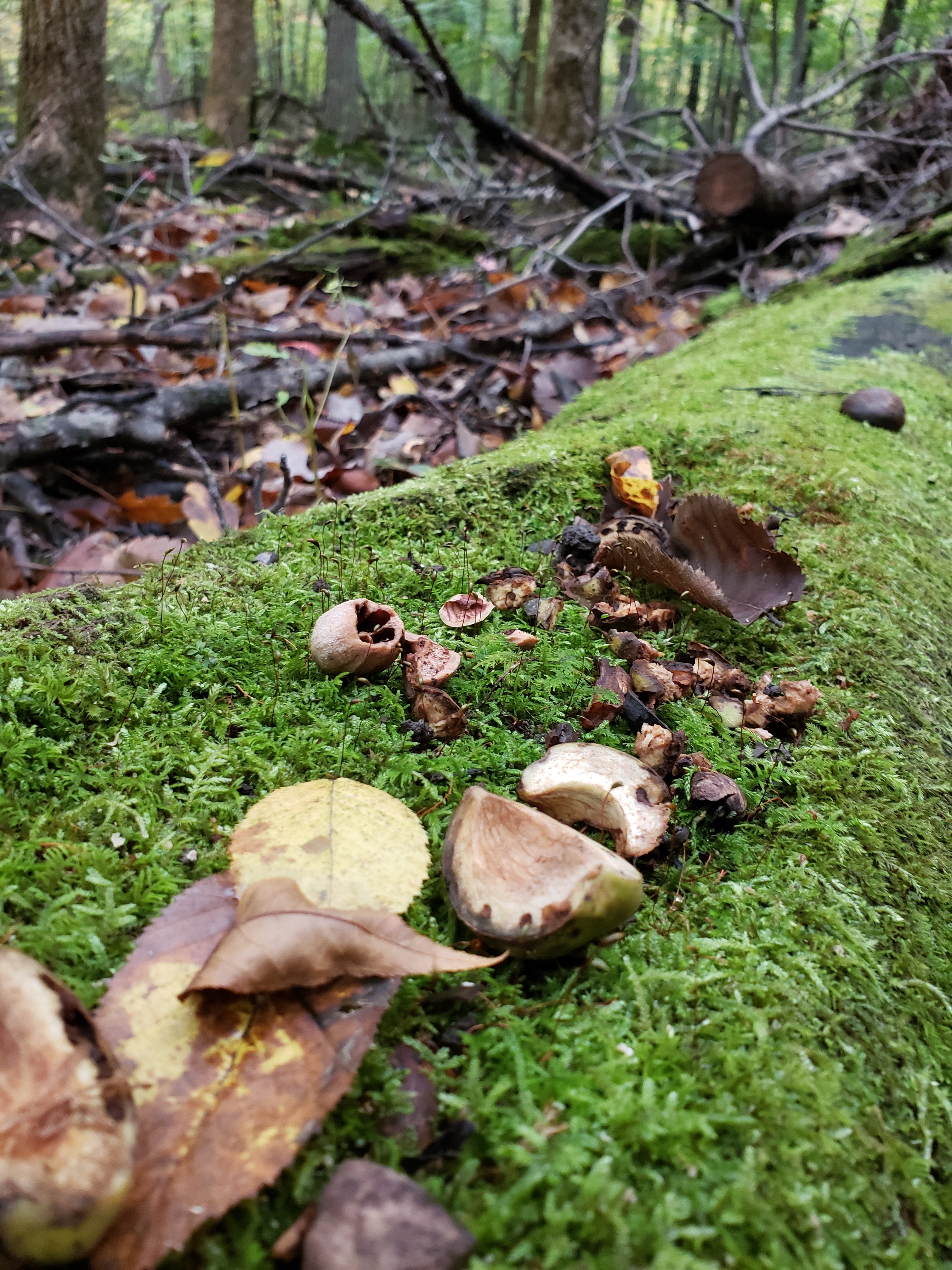 A dinner table with a view. Who sampled these hickory nuts?

With the ongoing pandemic, any of the following in-person gatherings may be subject to postponement or cancellation – please verify before you attend.  Online presentations are noted.  All meteor shower viewings are on your own.

Consider trying a new autumnal cocktail while watching one of the online events listed above (or while simply admiring the fall colors or perhaps while watching any of the upcoming meteor showers).

I have added more content to this blog, namely a page entitled “Swatling Falls Nature Trails,” that features information and photos about another destination located in the Town of Halfmoon. This destination has also been added to the Area Nature Preserves, Parks and Trails page.

Please check it out.

Hope you find the information helpful.

Hankering for a taste of fresh hazelnuts?

Now is the time to forage for our native species of hazelnuts; both American Hazelnut (Corylus americana) and Beaked Hazelnut (Corylus cornuta). And, with the return of sunshine for more than a few hours, yesterday and today, it is an especially good time to head out in search of them. I did so yesterday.

For helpful tips on foraging and processing these tasty nuts, please view “Hazelnuts,” which can be found on the Foraging for Wild Edibles webpage of this blog. That info packet contains lots of information, including a variety of recipes on how to enjoy your harvest.

While you’re out and about, always take time to enjoy whatever is in bloom in the vicinity of what you’re harvesting. I found these growing next to a hazelnut thicket during my outing.

This week, I’m featuring Turtlehead (Chelone glabra) as one of our local wildflowers that begins to bloom at this time.

PLEASE NOTE:  New York Protected Status:  Exploitably Vulnerable = Native plants likely to become threatened in the near future throughout all or a significant portion of their ranges within the State if causal factors continue unchecked.  Fragmentation of remaining habitat, contamination of the gene pool, and wild harvesting present ongoing threats to this species.

Chelone (Χελώνη) – meaning “turtle” in Greek – was a mythological mountain nymph whose mischief or late arrival at Zeus’ wedding caused the nymph to be cursed making her carry her house with her wherever she went (as a tortoise).  The distinctive shape of this flower is reflected in the genus name as well as in its common name.

This perennial plant is about 2-3′ tall and unbranched or sparingly branched.  The central stem is smooth and square.  Each pair of opposite, coarsely-toothed, lance-shaped, dark green leaves rotates 90° from the position of the pair of leaves immediately below.  The leaves are 3-6” long, hairless, and finely serrated along their margins.  At their bases, the leaves either have no stems or they have petioles that are less than ¼” in length.

The central stem terminates in a dense spike of white flowers about 3-6″ in length, blooming from the bottom to the top.  Each flower is about 1¼” long, consisting of a 2-lipped white tubular corolla that is somewhat flattened at the mouth, where it is more wide than tall.  The upper lip of the corolla functions as a protective hood, while the lower lip has 2-3 shallow lobes and functions as a landing pad for visiting insects.  The lower interior of the corolla has abundant white hairs.  There is no noticeable floral scent.

Each flower is replaced by a papery ovoid seed capsule that turns darker shades of brown when the seeds approach maturity.  Each seed capsule contains several seeds that are flattened and broadly winged; these seeds can be blown about by the wind and likely float on water.

Following the dispersion of its seeds, the plant stem with empty seed capsules persists into the winter, aiding its identification.

There are no known uses of Turtlehead for food.

American Indians used this plant for a variety of ailments.  The Cherokee used an infusion of blooms for wounds, as a laxative, and to treat fevers; they also used it as a dietary aid to increase the appetite.  The Iroquois used a decoction of roots as a liver aid.  Other groups used the plant to prevent pregnancy.  The green, mashed plant juice was also applied to skin sores.

Traditional herbalists create a tonic from this plant that is claimed to be beneficial for indigestion, constipation, and stimulating the appetite.  It is also an anthelmintic (de-wormer) and a salve from the leaves may relieve itching and inflammation.

Turtlehead provides a valuable late season source of nectar.  That nectar is consumed by long-tongued bumblebees, which have the size and strength to force open the tops of the flower to reach the nectar inside; Common Eastern Bumble Bee (Bombus impatiens) and Half-black Bumble Bee (Bombus vagans) are reported to be the most common visitors.  View a brief video of bumblebees visiting these unique blooms.

“The butterfly has only one brood each year, which flies for only three weeks from mid-June to early July. The females lay their eggs at that time on turtlehead leaves. The caterpillars hatch a few days later and spin communal webs on the plant, usually embracing several leaves. When they consume those leaves, they move onto others.

They eat, grow, and shed exoskeletons three times before frost. Shorter days and colder nights stimulate them to descend the plant, roll themselves into some duff beneath it, and convert the water in their bodies to an organic antifreeze so they don’t freeze. In late March, they become active again, returning to the plant for two more instars before turning into chrysalids later in the spring.  They emerge in June to start the cycle all over again.”

The leaves of Turtlehead contain the glycoside catalpol (and its precursor, aucubin), both of which deter a number of plant browsers from eating them because of their bitterness.

This week, I’m featuring Flat-topped Goldentop (Euthamia graminifolia) as one of our local wildflowers that begins to bloom at this time.

Due to the similarity in its inflorescence, this plant was once considered a Goldenrod and another common name is Grass-leaved Goldenrod.  In 1818, Thomas Nuttall proposed Euthamia as a subspecies of Solidago, but in 1840 declared it as a distinct species.  This separation was largely based on morphological differences, such as the arrangement of the flower heads in the inflorescence and the presence of glands on the leaves.  Subsequently, DNA evidence further revealed that these genera are closely related, but should be separate.

This herbaceous perennial plant is 2-3½’ tall.  Stems are unbranched on the lower stem, but typically have few to many erect, leafy branches in the upper plant, creating a bushy crown.  The slender stems usually have lines of fine white hairs.

The alternate leaves are linear and have smooth margins.  The larger leaves have 3 conspicuous veins, although the smaller ones usually have only a single conspicuous vein.  They are up to 4″ long and 3/8″ across, or slightly wider.  Sometimes there are a few white hairs near the base of the leaves and along the central vein on the underside.

There are clusters of small composite flowers at the top of the plant and many of the upper side stems.  The clusters are about 1¼″ wide and have of 20 to 35 mostly stalkless flower heads.  Together they form a broad inflorescence up to 11″ wide that usually appears flat topped.

Each composite flower is yellow, consisting of about 21-35 disk florets and ray florets; it is only about 1/8″ across.  The color of the blossoms is a lighter canary yellow rather than the darker, more golden color of a true Goldenrod.  These compound flowers often bloom gradually, rather than simultaneously, with older flowers turning brown while younger flowers are still in the bud stage.  Sometimes there is a mild floral scent.

The tiny seed (~0.5 mm long) is a hard, pubescent, one-seeded, white nutlet.  The seed is attached to hair-like bristles (pappus).

Flat-topped Goldentop, and as with all Goldenrods, may be used in herbal teas (also called tisanes).

The seeds are eaten by the American Goldfinch (Spinus tristis) and Swamp Sparrow (Melospiza georgiana) to a limited extent, while the foliage is occasionally consumed in limited amounts by the Eastern Cottontail Rabbit (Sylvilagus floridanus) and White-Tailed Deer (Odocoileus virginianus).